The members of the Tacoli family were warriors, judges and administrators and among them we have several illustrious characters. In 1176, Francesco Tacoli, fought in the Lumbard League against Federico Barbarossa;
Gherardo, bishop of Belluno, died on the battlefield in 1197 defending the lands of his parish from Treviso invaders;
Alessandra Tacoli who lived in the 15th century and whose daughter Daria gave birth to the famous writer Ludovico Ariosto;
Pietro Tacoli who was the founder of a renowned textile industry in the 1600’s.
The Tacoli started to manage farming lands in the 1723, when the Estensi family allocated the feud of San Posidonio as a Marquis territory to Pietro Tacoli, founder of a renowned textile industry in the previous century.
Today, Paolo, son of Federico and Margherita, manages the family company, with the help of his daughter Paola and his son Federico.

In 1758, Count Fabio Asquini became known all over Europe for the creation of the famous Picolit grapevine. He had spent many previous years on his estate of Fagagna carrying out grapevine breeding studies which resulted in the passionate cultivation of this precious grapevine.

The first 14 bottles destined to contain the precious wine were made in Murano by the skilled hands of the master glassmakers. Picolit was soon offered to Pope Celemente XIII and to the main royal houses of the old continent. Due to its great popularity, in the following year the family exported more than 1100 bottles. The activity of the Asquini family on the estate in Cuccana began in the first years of the 19th century. 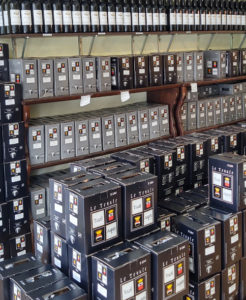